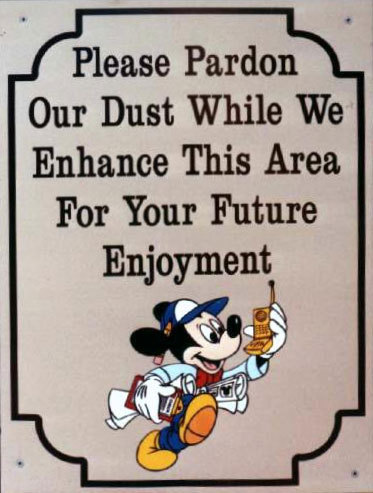 Better Than It Was

“Do what you do so well, that they will want to see it again, and bring their friends.”

When my wife and I first married, we had a favorite catch phrase, “Better than it was”. We even put it on a plaque and hung it in our first apartment. Turns out that this motto has served me well over the test of time. But originally It was just a funny little catchphrase that we would use when we were supposed to be doing chores, or laundry, or making a home repair. We would jokingly ask each other, “So! How did it go?” And the other would respond, “Well, it’s better than it was.”

While Better than it was begun for my wife and I as a fun catchphrase it has evolved from there. My wife and I use it as a compass point. Over time it has become sort of our north star if you will.

Today, when I learn a new magic effect, when I create a magic show, whenever I’m performing, each attempt is based on the idea of “today I want this show to be Better Than It Was”. It’s a discipline that is required of anyone who wants to excel in Live Entertainment. When I was young, I would watch a long running theatrical production and would question, “How do they do the same show over and over and over and still not phone it in?”

I learned the secret to “not phoning it in” at the Great Movie Ride at Disney’s MGM Studios, now the Disney Hollywood Studios.

The Great Movie Ride, or GMR as we called it, was a 22 minute attraction with a tour guide. The tour guide had to memorize a spiel, a full script, and you had to learn every “is”, “and”, “the”, and “of” without missing a word. You had to be able to recite it back perfectly. I presented that repetitive spiel for years, and every single time I did, I tried to find a way to make it feel as if it was the very first time I was ever saying those words. I felt that I owed it to the guests to make it feel as if this was the first performance I had ever delivered. I was always listening to my vocal style, listening to the intonation in my voice, trying to figure out how to say this line better, or how to better connect with the excitement, enthusiasm, and the emotion I was expected to convey in the words from our script. All while making it seem correct, fresh, and relevant.

It was my time at GMR where I discovered that if you always took the attitude of “this time I will make it better than it was”, the show never became stale. You simply adopt a mindset of always adding nuance and improving your delivery of it.

When I later had the opportunity to create my own show I began with a strong outline, and over the period of eight years I kept working it and tweaking it, always looking for an improved way to connect with my guests. I would challenge myself by asking, “how can I improve the engagement that I have with the audience?” It was important to me to be able to relate to this audience better than I did last time.

During my 30 years with Disney I have seen this basic idea played out in a much bigger context. When Disney builds a theme park it is never finished. Disney will continuously look for ways to plus the guest experience. To make it Better Than It Was. This is at the heart of the Walt Disney quote I began this post with. As a leader, a mentor, or as a business, your goal should be to do what you do so well that people will want to come back and see you do it again, and they will tell others. In order to do that, you must continually strive to make it Better Than It Was.

Your business strategy should be to always deliver your best work.

There has to be a caution in all of this. Don’t fall into the trap of thinking, “I better wait. Maybe I need to work at this a bit more and then I’ll be ready to share it when it’s done, or when it’s ready, maybe when it’s perfect.” Waiting for Perfect is a roadblock. Perfect is going to stop you from ever bringing your work to the world. No Disney Park is perfect. There will always be room for improvement. This is the very reason why there will always be ways to make it Better Than It Was.

Not one single magic show that I have done in my career has been perfect.

No effect that I have performed has been perfect. But every time I present that effect, every single time I perform the show, my goal is to make it Better Than It Was. It’s why even when I know every move of the magic routine that I’m going to perform and the precise effect that I want that moment to create, I still have to put in the daily time to rehearse it. I still have to practice it. And I still have to pay close attention to it when I’m performing it for my audience.

There have been events when I have had to perform a full show four times over the course of a single day. But each one of those is a different audience. I want the experience for “this” audience, to be the best that I can deliver, and that means that it ought to be Better Than It Was.

Of course I won’t always be able to achieve that goal. That’s a pretty high bar to jump over. When we miss the mark it doesn’t mean that we have failed. It just means that we dust ourselves off and try again.

Perhaps it is only that as I get better, as I work to improve my skills, I will recognize how much more work there is ahead of me. That’s not a bad thing, that’s a good thing.

We need those reminders. We need to have the self-awareness to admit, “I’m a work in progress, but, I will get better at this. It’s better than it was”.

Better Than It Was will also prevent us from becoming complacent.

There’s a popular expression that I’ve heard repeated a few times of late.

To me that sounds like a resignation. That’s not trying to move the needle. It’s throwing our hands up and saying here’s nothing I can do about this. It’s out of my control. Let the results be what they are.

If we believe that anything can be “Better than it was,” then we can say, “here’s my work, I’m showing it to you. It’s the best that I have to offer at this moment. But tomorrow, when I bring my work, and I show it to you, it’s going to be better”

This has to be paired with other philosophies such as,

“Do it before you’re ready” but I will save that discussion for a future post.

Imagine the impact you can have on relationships, your work, your home life, your encounters with others, if your goal, your philosophy is Better Than It Was.

If this is a daunting idea you can start small. Apply the attitude of Better Than It Was to random encounters.

What if, as a part of our day, our goal was that in small ways we just helped make it better than it was.

I will be the first to admit that I don’t know if all of those efforts make an impact. I don’t know how many of them are noticed. I don’t know if it registers. But I do know that if I don’t do these things, they won’t. So, while from time to time I may say, “for the moment it is what it is”, that does not mean that I’m going to stop there. Today is better than it was because I put forth the effort to make it so.

I mean Better Than it Was.

Each action, each movement, each step moves me forward, propels me forward so that the accumulative effect is that I have made a larger improvement. Better Than It Was repeated consistently means that everything will have improved.

It will be better than it was.