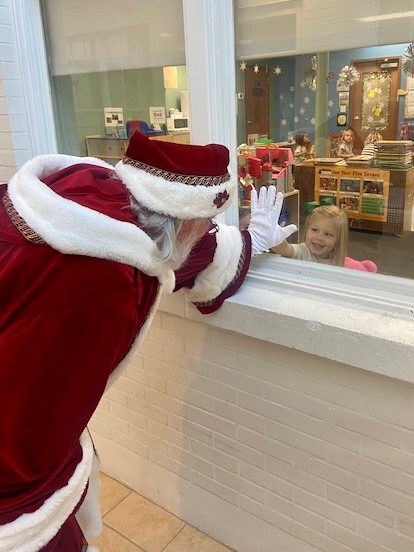 Yes. This sounds silly but hear me out.

Years ago, when I put on the mantle, I expected that being a “Santa Helper” would be incredibly fun. And it was. Riding the float in a parade with thousands of people cheering for you is intoxicating. I liken it to what it must feel like to be Bruce Springsteen. I did not expect that, along the way, it would teach me valuable lessons. I mean, how can someone who only shows up for a few weeks each year and gives away the store be a role model for developing leadership skills?

It turns out that much like anything, there are always things that we can learn. These lessons then can be transferable for many other moments. What I have learned from my time in the Red Jacket is that when he is at his best, Santa is there for others more than he is there for himself. After all, what exactly is Santa’s job? The job is to be fun, to pose for photos, listen to wishes often whispered so softly as to be barely audible, and to fulfill the dreams of others. That does not sound like a strong set of Leadership traits. But in doing all of this, there is a key skill set that any leader would benefit from learning. What follows is what I call my 5 Ways to Lead Like Santa –

This is such an important lesson and ultimately shapes the others that I will share. The difference between a poorly delivered Santa moment, an ok Santa visit, and a Memorable Santa Experience is how well he connects with others. In every situation there is an agenda. In many situations there can be multiple agendas. And, often, those agendas are at odds with one another.

The event organizer wants to ensure that EVERYONE gets to see Santa. Efficiency is key. Mom or Dad wants that perfect photo. More often than not it’s about capturing an unrealistic ideal. But children have other concerns. They may view The Big Man as a best friend, a last chance to fulfill a request, or something to be avoided at all costs! In all these situations, I have learned that the secret to a memorable experience is to be Interested, not Interesting.

None of those agendas are about the man himself. They are about the needs of the person he is meeting. It’s a very delicate balance that can be best navigated by simply prioritizing the needs of others ahead of our own ego. If Santa is there to Be Santa, he will most certainly get it wrong. And You will know instantly when you have gotten it wrong, or gotten it right.

Over time I began to hear more and more of the latter, and less and less of the former. It’s the difference in the Impact he delivers: Santa knows that thinking that he needs to Be Interesting (substitute important) will never enable him to connect at a level of trust that can only come from being interested in the hopes and dreams of others. Despite all appearances to the contrary, it’s not about him. It’s about the outcomes that he can help others reach. Are you doing this for the forced adulation of others or to Serve Others? The first one will make you just another generic moment. The second will establish you as someone who others will want to come back to time after time and encourage others to seek out.

2) It is important to not over promise and underdeliver

This is easy to get wrong, and the consequences can be emotionally shattering. A child who has been assured by Santa that they will get exactly what they want may or may not find what they are expecting under the tree on Christmas morning. But that’s not Santa’s fault, right? Of course it is. The child has emotional capital invested in this. Yes, they may get that treasure that they are dreaming of, but for any number of reasons, they may not. And a disappointed child on Christmas morning is NOT what any parent wants. Making promises, and then leaving it up to others to deliver on them, is not how you want to be remembered.

Making blind promises has consequences, even if you are not there to deal with the aftermath.

We believe that a child who does not get the gift that they asked Santa for will get over it. We say that it’s a part of growing up. Perhaps it is. But we still remember the hurt. The betrayal. The Broken Promise. That relationship will never be the same. It could have been easily avoided had Santa simply not over promised what he could not guarantee. This is a lesson that we often see repeated in our adult lives or, worse, fall victim to as leaders ourselves.

Think of a time that you have put your trust in a boss, or a manager, or your designated leader. Did they keep their word, or did they over promise and underdeliver? Even if it was due to forces beyond their control, how did that effect your relationship with them? A careless promise is the fastest way to lose faith and break trust, not just with the individual the promise was made to, but also with whomever must deal with the consequences later.

If Santa is meeting families at a community event, there is no way to know what the economic situation is in their home. Now what is Santa to do? Simple. Just be there for the joy of being there! There is no rule that Santa must ask, “What would you like for me to bring you for Christmas?” There are any number of other questions: How is School? What is your favorite thing to do? Who is your favorite reindeer? This ties back to the first rule: Be Interested, not interesting.

Santa is bigger than life. Santa is Jolly. Santa is often loud. That works for most situations, but not for all. Some children are meeting Santa for the first time. Their only experience with him is by seeing him on television or in a story book. An in-person visit is a very different prospect. It can be overwhelming. At that moment the reality of meeting him is too much. I have also seen the exact same thing happening when a child is meeting Micky Mouse. In a moment like this, Santa needs to dial it back a bit. A quiet moment can be just as powerful.

It may be that there is information that Santa is not aware of. A group of children with an adult might not be siblings. It can be an awkward moment when Santa miss-identifies a pair of kids as siblings or the accompanying adult as Mom or Dad. What should Santa do in a moment like this? Easy, don’t make assumptions without information. If you ask open ended questions, in most instances the information that you need will be revealed.

As a leader, so many times it’s not what you say. It’s the questions that you ask. Doing this will create greater awareness of the situation that can deliver huge benefits.

It might seem that there is a big disconnect when saying Santa and Authenticity in the same sentence, but children can sense authenticity. So can adults. It often comes down to trust. If you are pretending, it can usually be sensed. Be Real. Don’t say one thing and then behave differently, yourself.

Santa asks if we have been good. Have we been helpers? Have we been kind? Are we using our listening ears? For Santa to be able to ask these questions, he must also display the same behaviors. He must set the example.

Authenticity is also linked to being an authority, which is not to be confused with being an expert. This can be easily met with three simple words: DO YOUR HOMEWORK. Know your history. Be open and candid. Know who you are and what you believe is important. But don’t be afraid to admit when you don’t know something. Children are very capable of asking for things that Santa is not u- to-date about. Simple, Santa will ask for details and let the child explain it, i.e., go to the real experts, in this instance, the children. They love to share knowledge with adults. Most folks do. It makes them feel seen, heard, and respected.

Most folks do not like to have their behavior forced and controlled. When it comes to getting the photo, let them be themselves. A candid photo will almost certainly be more meaningful than trying to force someone into adopting the planned pose. Santa is more authentic when he lets others be authentic.

No two people are the same. Treat them as individuals. Is there an opportunity to let them express their individuality? If they don’t want to follow your lead you cannot win by trying to bend them to your will. You probably haven’t gained their trust. If there is an opportunity, adjust your own behavior to meet them where they are. Do you enjoy forced compliance? Why would they?

5) Be open to new Traditions

“It only takes doing it one time to make it a tradition.” The funny thing is each of us has invented how we like to celebrate during the holidays. In some homes, it is traditional to open one gift before going to bed on Christmas Eve. In other homes, presents must not be touched until Christmas morning.

Santa knows that how a holiday is celebrated, or which traditions are observed, is a personal choice. For that reason, he loves to help others celebrate their traditions the way that they like to celebrate, or to help them create new ones. Just because we have never done it this way before does not mean that we can’t do it this way now. Likewise, just because we have always done it this way in the past is not a reason to have to continue to always do it the same way moving forward.

The very tradition of Santa, himself, is evolving and changing to meet the needs of new generations. And that is as it should be. It’s only kindness and thinking of others that is constant.

I have loved learning these insights. I have also found that following them has improved my interactions not just this time of year, but the whole year through. So, in the spirit of giving, I share them with you. May they guide you just as much as they have guided me.