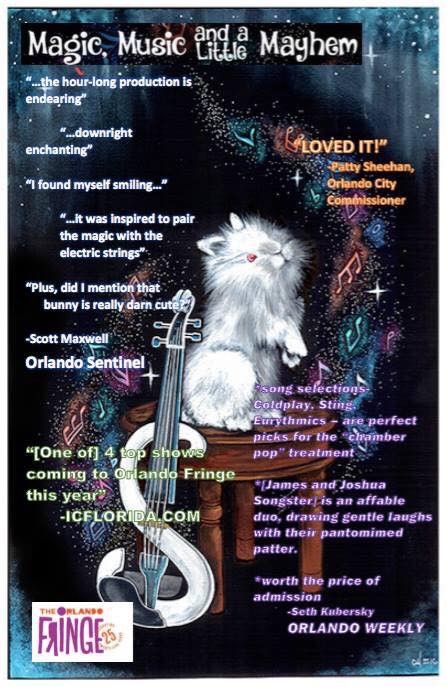 In Part 1 I shared that as a cast member at Walt Disney World I learned to never say, “I Don’t Know” without then making the effort to find the answer.

When I began learning magic I did not realize that there would be so much that I did not know. I thought that performing a magic effect was pretty straight forward.

Learning the mechanics of the effect is perhaps the smallest part of developing the ability to perform and present it successfully for an audience. Learning to perform it successfully and present it for an audience is perhaps the smallest part of being a successful professional magician. Pro magicians love to say, “It’s called show BUSINESS!” Being an entertainment entrepreneur is an entire enterprise that you are not going to learn in a magic book.

I learned pretty early on that I am good at coming up with an idea. I might have a concept that I want to develop. I can visualize what I want to put on stage. I imagine a show concept that I want to create. In most instances my producer and creative team will look at me and ask, “what are the staging parameters of this? What are the lighting needs? What tradeoffs and opportunity costs will there be for taking on this project and tying up resources?” I was in the business for years before I heard of the term opportunity costs.

This idea came home for me when I proposed to produce and star in a show for the Orlando Fringe Festival. In most cases a good show for a Fringe festival is supposed to be an experimental project. After all, it’s not intended to be mainstream. It’s on The Fringes of traditional theater. Typically, a fringe show is not for finished, complete, done, ready to package entertainment. It’s where artists go to try to be different, avant-garde, and cutting edge. It’s a place to experiment. I felt that The Fringe would provide a venue for me, and by association my team, to step out of my comfort zone, push my own limits, and develop new material. I still managed to underestimate the huge number of decisions that would need to be made. I was about to encounter situations I had never come up against before, and, therefore would not have a ready answers for dealing with them. To switch analogies; The Fringe is Sink or Swim.

And most people Sink on their 1st attempt to stage a Fringe show.

But no one could accuse me of not being fully in. To use the experience as a place to experiment I specifically gave myself obstacles that had to be overcome. I did this because I wanted to see how we would find solutions. We discarded what was easy and instead made decisions that would force us out of our safety zone.

As a person who has spent my entire professional life performing in front of audiences or in public speaking, I knew that my greatest strength is my speaking ability. The one skill I know I have is using my voice. I chose instead to remove that option and perform the entire show without me ever speaking a word. I wanted to force myself to find methods to tell a story in a different way. How would I hold the audience’s attention and communicate if I wasn’t using words? It was clear that I didn’t know what I didn’t know.

Are you thinking that the obvious choice was to use music?. Sure. But I wanted to use live music.

I had never worked with live musicians in a magic show. On those few occasion when I had performed in a theatrical musical the musicians had always been down “in the pit”. For this show I wanted them onstage, front and center. I visualized them as onstage members of the ensemble. Not merely the soundtrack but characters in the story. But how do you incorporate a cello, violin and a viola into stage blocking? How do you transition in and out of their musical pieces and incorporate them into the action happening on stage?

The solution was to approach the very talented Michelle Jones – https://www.violectric.net/  and asked her if she would be the musical voice of the show. She and her group agreed to help create the shading and the emotion for the show. They were involved in every decision of the show.

I asked my son, Joshua, to join the cast and perform along side of me, not as my assistant the way we had in the past, but as my equal. In turn he stepped up and performed an entire piece of the show as a solo.

Each of these elements were things that none of us had done before. When I told them going in, right up front, that I don’t know what I don’t know everyone said, “let’s go find out.” We agreed that the worst-case scenario might be that all we had to gain was a learning. There was a higher-than-average chance that we would learn what didn’t work. But we agreed that we were going to come out of it knowing something that we didn’t know before. The key was, we didn’t know what we didn’t know and would only find out once we were fully committed. Ultimately, that is a very good analogy for what happened.

Oddly enough, I began to feel that Not Knowing What We Didn’t Know worked to our advantage. If we had we had known in advance the size and complexity of the challenge that we were taking on, or of the number of problems we would have to navigate, we might have decided it was too large a hill to climb. But because we didn’t know all of that, we took the risk and created an amazing show.

The biggest surprise was how much it ultimately took to create an original show from the ground up. I value every moment of it. Even when I was terrified.

The Bottom Line? As a leader sooner or later you will be asked, “Will this work?”